My best guess (as of early summer) is that Nolop will be closed for general use in the fall, but we may be able to offer some kind of 3D printing and/or lasercutting services that can be performed in isolation.

In the meantime, if you’re desperate for parts, you could try Shapeways for 3D printing, Big Blue Saw for laser and waterjet cutting, and Xometry for machined parts.

If you’re desperate for community and you have a Tufts email address, come join the Nolop Slack channel, where Brandon and a bunch of the Nolop zealots are yapping about 3D printers, Arduinos and whatnot.

And take heart, mateys! Time will pass, we will recover, and we will go back to welcoming people to our lovely makerspace.

Nolop will close Sunday night, March 15th, until an undetermined date, because of the coronavirus. Until then, it will be open regular hours (maybe not Saturday or Sunday morning).

If you just need to pick up a piece of hardware or a project you left in Nolop, Brandon will be in Nolop intermittently (see his Twitch stream for a Nolop fix). Unfortunately, you are asked not to work in Nolop during the closure. The doors are locked.

Feeling discouraged? Just look at what Matthias Wandel can build in the woods of Canada!

Nolop will be open:

The red zone (the dangerous tools in the back) will very likely be closed for the entire break.

The first semester of Nolop operation was a massive success. I want to note a few hard numbers for posterity, plus record some thoughts about how the place has been thriving and what we can improve next year.

For the last 6-8 weeks of the semester, Nolop was packed with people building cool stuff every afternoon and evening. The peak was likely the afternoon of Monday, April 29, when I counted 52 students working in the space, plus 3 or 4 staff members assisting them. All chairs were taken, and people were overflowing on the floor, many working on robots in small teams. The bulk of the students in that peak came from ES2 (Computing in Engineering), which had a project due the next day, and ME1, due two days later, but we also had other students in the mix.

Off that peak, I would often count students in the space when I went home for the day around 5 PM; values of 25-30 students were typical. On Fridays, that would be dominated by the Robotics Club and other people working on extracurricular projects; on other weekdays, curricular work dominated.

21 different courses from 11 departments used Nolop over the course of the semester. The heaviest curricular usage came from the Mechanical Engineering department, followed by the SMFA sculpture classes.

We also had some usage by graduate students doing research in labs in Biology and Environmental Engineering. Typically, they were building elements of some scientific apparatus that they needed to perform a certain experiment.

After curricular usage, the next greatest utilization came from student clubs. The Tufts Robotics club, Design for Social Good, and the Tufts Make Galton board subgroup all held their weekly meetings in Nolop on Friday afternoons; the Tufts chapter of Students for the Exploration and Development of Space met in Nolop on Sundays. These four groups (especially the Robotics Club and SEDS) are the most active student engineering groups on campus.

Additionally, the Tufts Steel Bridge Team did their test assembly of their bridge in Nolop; they also stored the bridge materials there before the competition. Also, SOLES, the Society of Latinx Engineers and Scientists, held a product design workshop with Google engineers in the space.

In March, we started a small student store inside of Nolop. The Nolop Store buys engineering materials at bulk prices and resells them to students at those same low prices, but in smaller quantity. The goal of the store is to take away the hurdles that students would have to jump to build a project. For most students, ordering huge sheets of plastic or plywood from industrial suppliers, plus paying shipping or driving somewhere to pick it up, is not a plausible alternative– they don’t have cars or the resources to afford large purchases. We found that by bulk ordering in moderately large quantities from industrial suppliers (say, ten 4 x 8 sheets of acrylic), we could undercut the cheapest prices otherwise available to students by a factor of 4, while eliminating the hassle and most of the cost of shipping at the same time.

Over the course of around 6 weeks in March and April, we sold $771.75 of mostly acrylic and plywood for lasercutting, as well as some electronic parts and motors for building electromechanical systems.

Over the course of the semester, we used 37 kg of 3D printer filament. We started with one Lulzbot Taz 6 3D printer. When that proved popular, we ordered unassembled kits of Prusa i3 MK3 printers, which student workers assembled, often late into the night. (In the classic words of Jeremy Kanovsky, “Printer finished @ 3:01 AM. Regrets? I have none. Sleep? I have none.”)

We had no significant safety incidents in the makerspace this semester. We dispensed a total of roughly 15 bandaids over the course of the semester. The most common cause was cuts from sharp edges of acrylic or plywood. The most severe was a fan blade that came loose and hit someone in the forehead. The result was a small cut, but notably the activity was not one enabled by the tools in Nolop; the student would have been playing with the fan motor in his dorm room anyway.

I trained 86 people to use some or all of the tools in the red zone; there were no known incidents of unauthorized tool usage.

We had three significant equipment failures:

Overall, machine maintenance was a small fraction of the total effort put in by the Nolop staff.

There are 5 core elements that Nolop has to hit to successfully support engineering fabrication at Tufts. For each category, I’ve identified ways that we can improve our performance.

Additionally, I hope to draw in the remaining student clubs that build stuff (the Biomechanics Club, the Society of Women Engineers, and the Tufts chapter of the ASME). (The Tufts Electric Racing Team has used Nolop a bit for electronics, but they’re a good fit in Bray because they need a garage door for their racecar.)

Nolop will be open during the day as usual during the summer. There will be limited evening and weekend hours. We’ll probably add some more, and then they’ll be posted here. (Updated Wednesday, June 26)

There are, however, a few weeks when Nolop will be closed. Specifically, Nolop will be well and truly closed June 29 – July 7, as well as August 24 – September 2. Additionally, Nolop will be partially occupied by the Engineering Design Lab July 14 – July 26. (You’re still welcome to come use the space during the Design Lab, but it will be a bit crowded.)

Also, as usual, the red zone will close at 5 PM, when Brandon goes home.

The detailed schedule, which shows all the closures for the Design Lab and various other gaps, is posted here as a PDF.

Over spring break 2019, Nolop will be open normal hours on weekdays except Tuesday and maybe some evenings. This post will be updated when we know more. (Updated twice, Thursday AM and PM.) 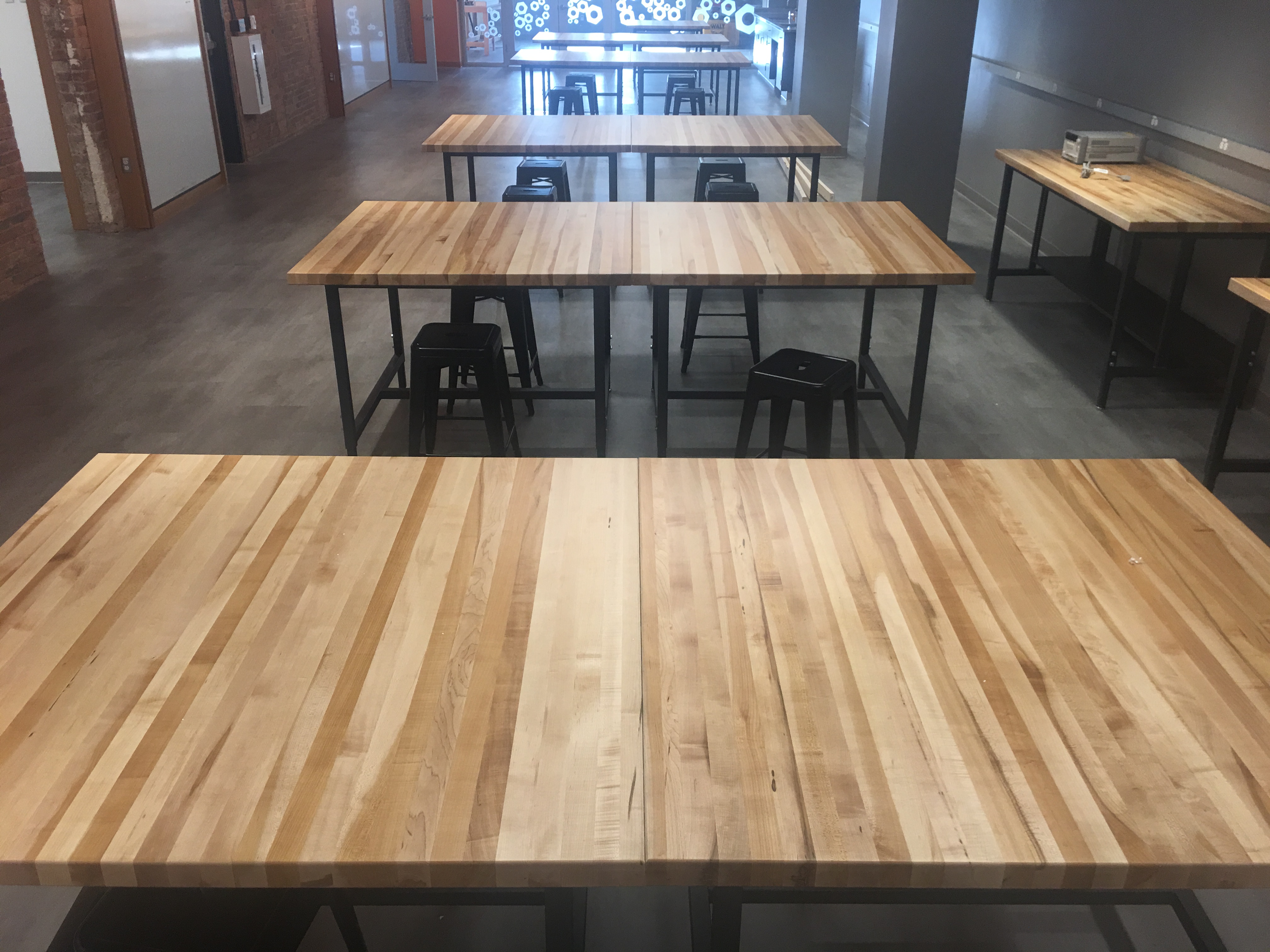 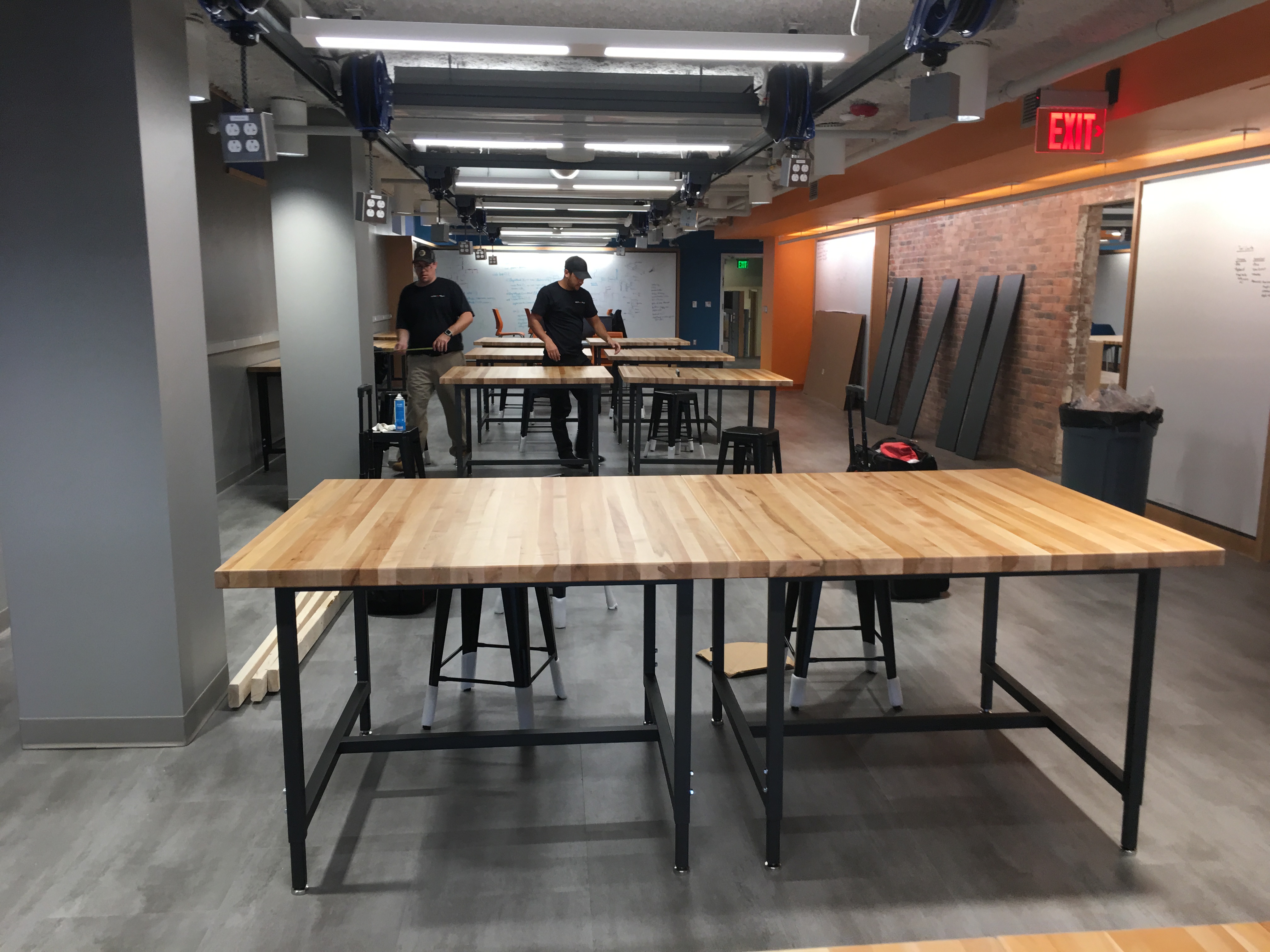 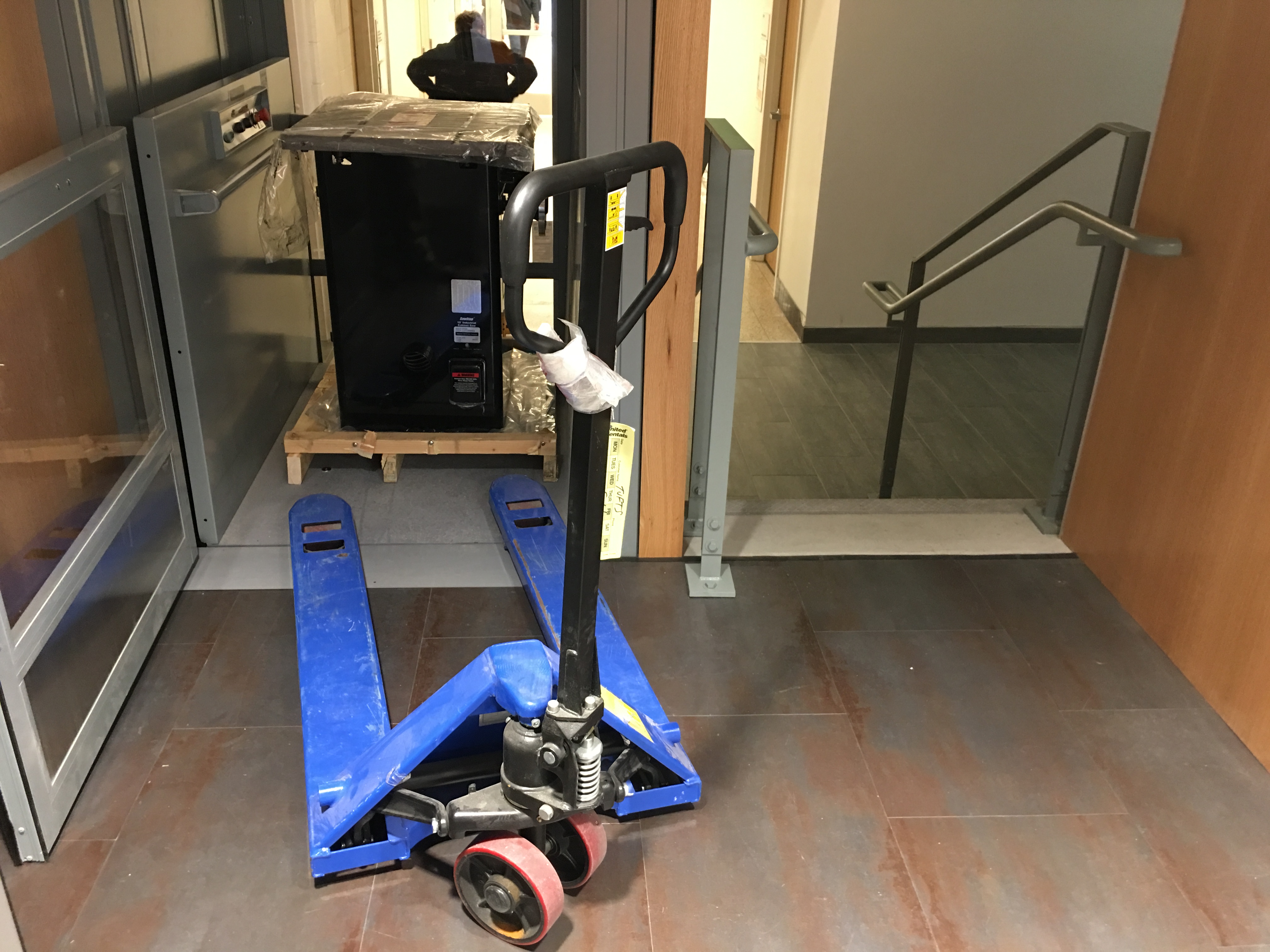 Yesterday, the cities of Somerville and Medford granted us certificates of occupancy. 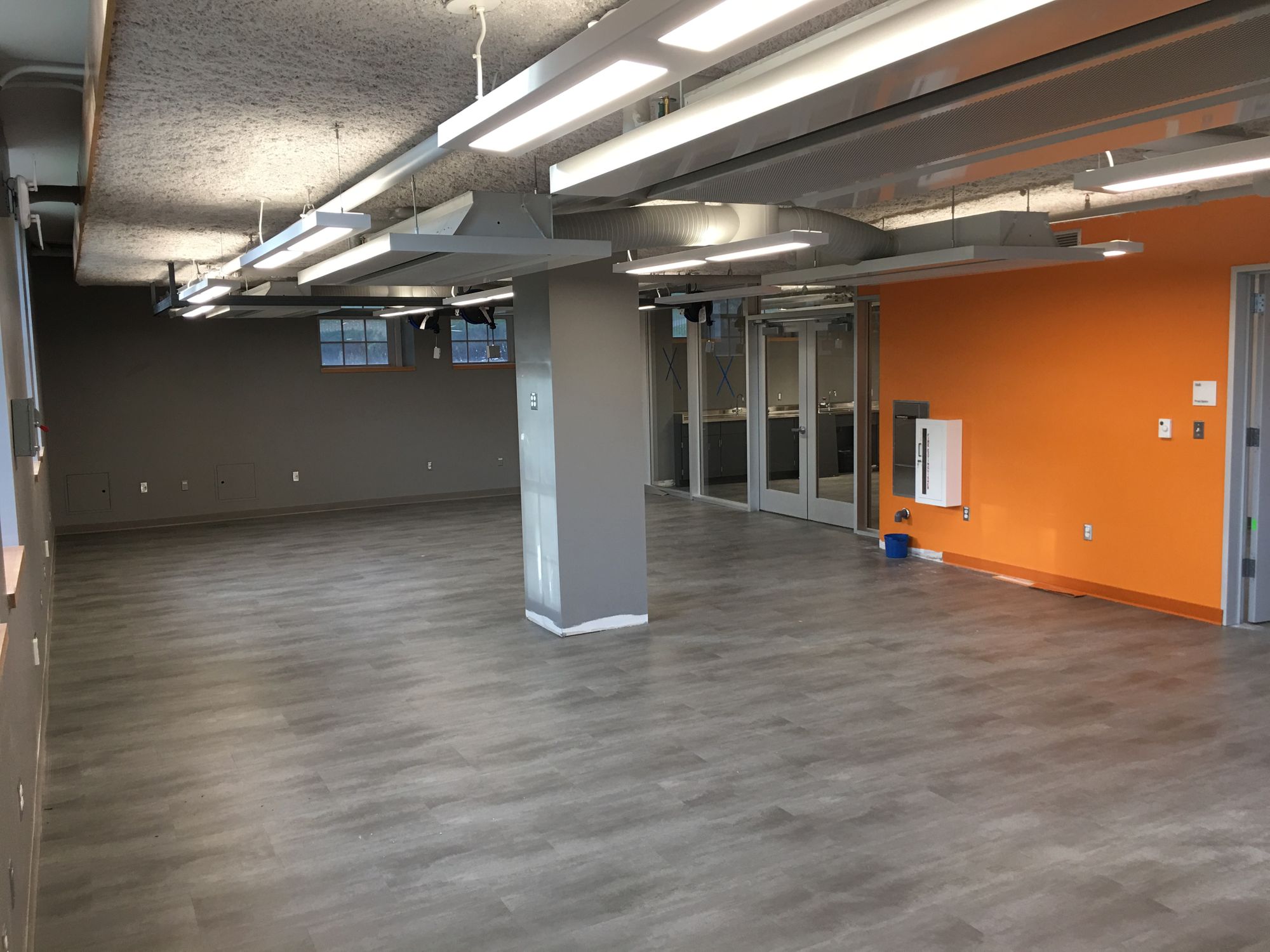 The eventual site of the Byrne Advanced Machining Area. (Thanks, Dan!) 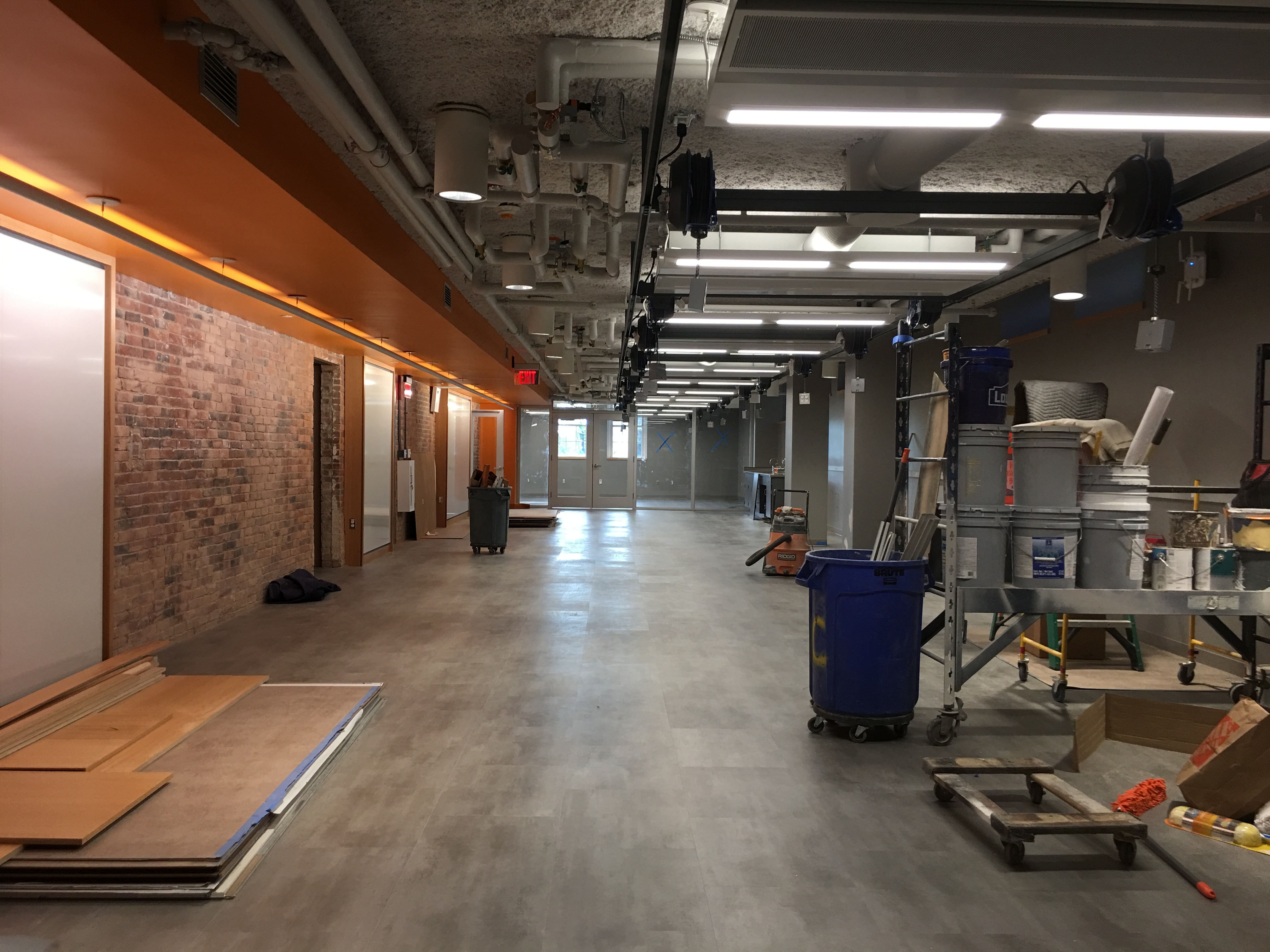 Looking down the space toward Byrne 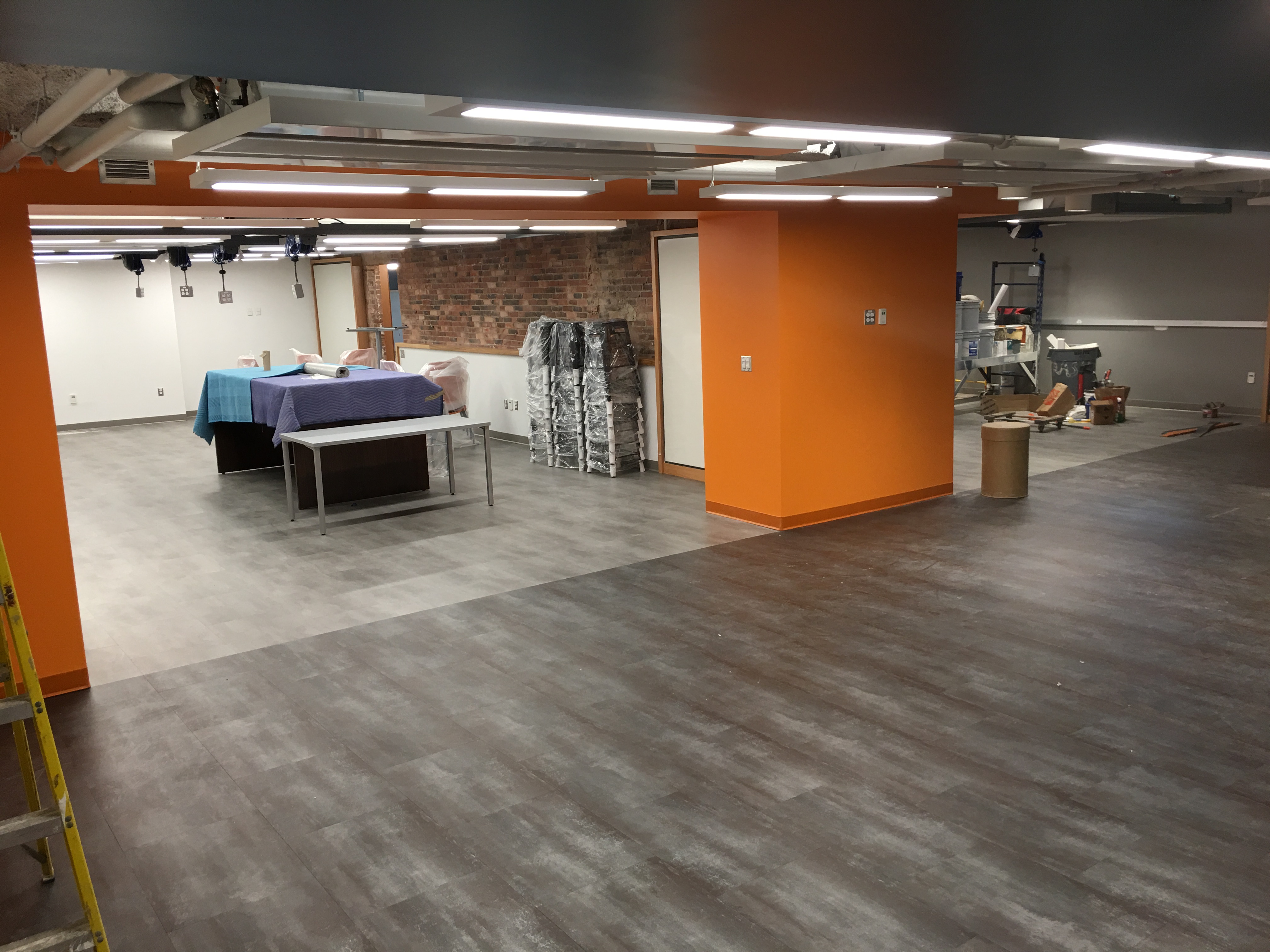 The digital fabrication area and the entry to the space, the latter funded by the Stricker Family

The ceiling is up; the first round of taping and mudding the drywall happened today. Some parts of the space have been painted. Note the brilliant orange entrance to what will eventually be the digital fabrication area. 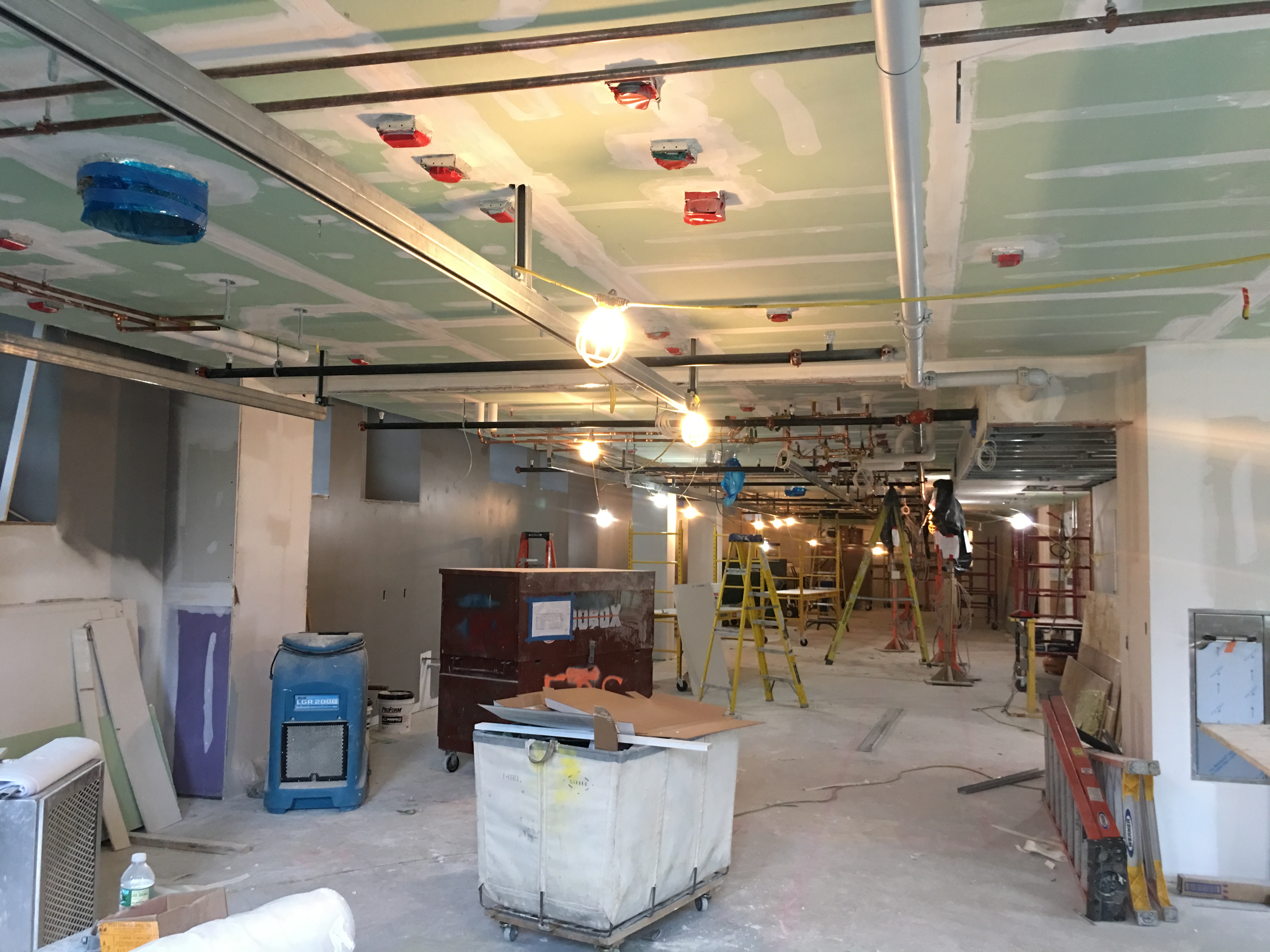 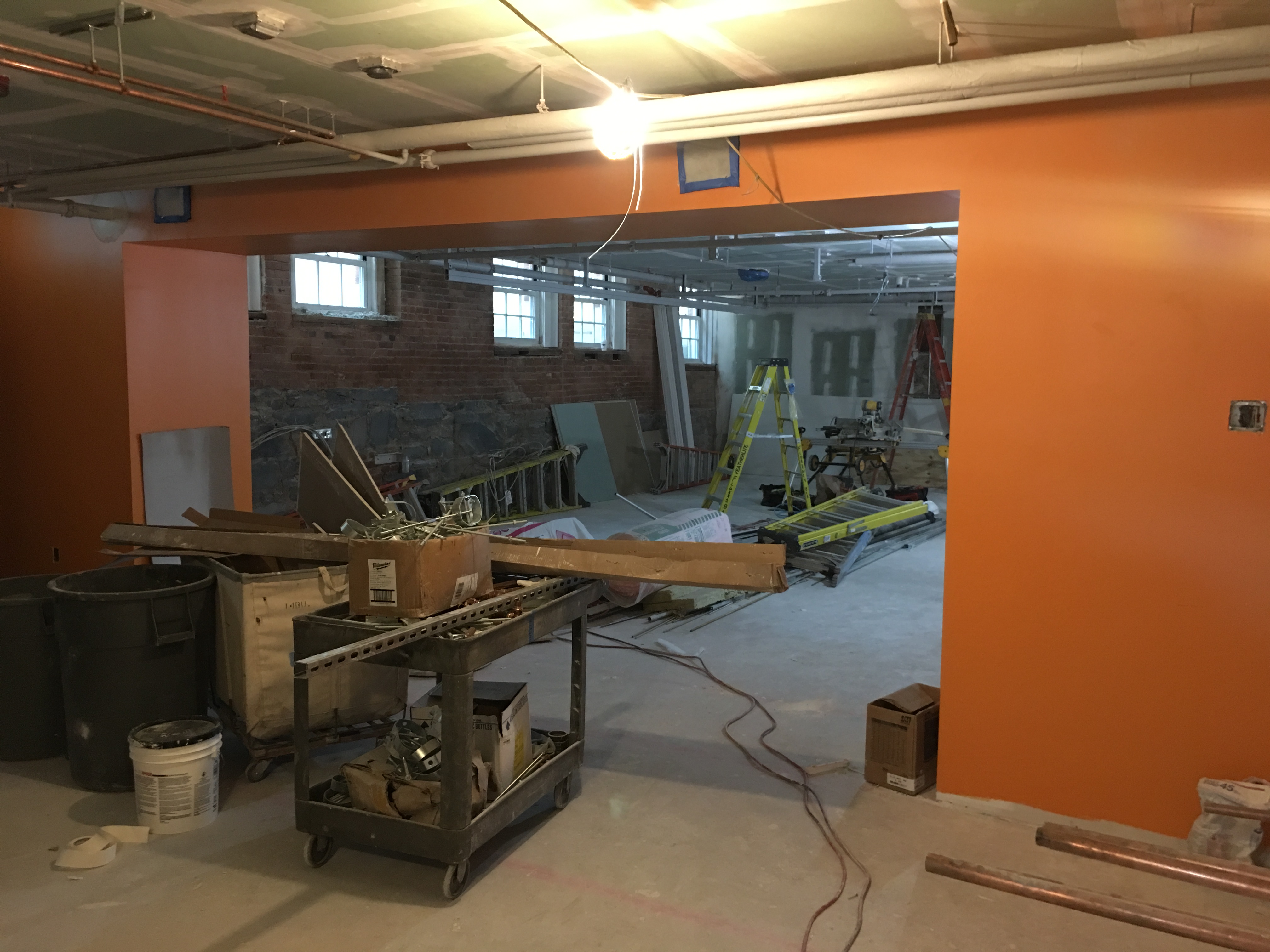